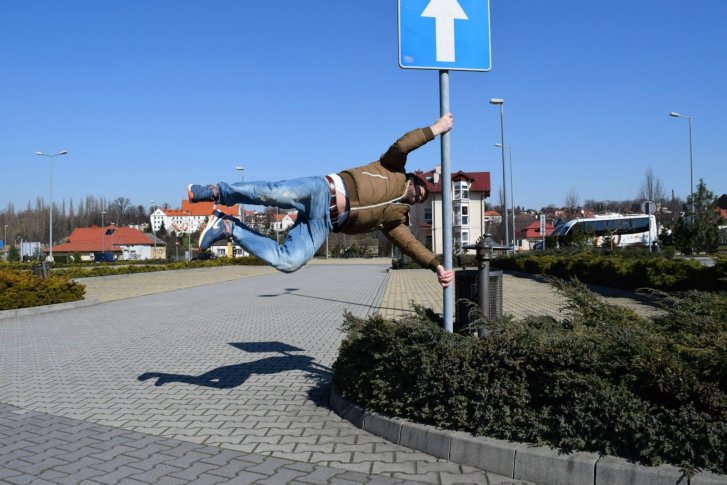 WŁADYSŁAW ROKICIŃSKI: Georgia, a far close country. My mother was a teacher in a school in Radom, and the surname of one of her colleagues, the school hygienist, was Tedeszwili. When I asked my mother, what a name it was, she answered: Georgian. It was the first time in my life, when I heard a Georgian name. And when years ago, as well, I saw a photo, actually a book illustration, of a mountain landscape of Svanetia: a village with many so characteristic for the region, stone defense towers, I knew that I would never forget it. Only once in my life, long ago, when Georgia still was a part of the Soviet Union, I happened to be in Tbilisi, and in some other places of touristic value. The country was beautiful, the people were kind and extremely hospitable. A ‘chekanka’, bought in a souvenir shop in Tbilisi, a piece of a simple artistic metalwork typical for the country: the face of a woman with huge, beautiful eyes, still hangs on the wall in my room.

I talk to Mirian Khukhunaishvili, the young conductor from Georgia, who came for a scholarship to Poland, and nowadays, lives and studies in Cracow.

I do for sure belong to the people to whom your homeland, Georgia, raises only good and friendly associations. But at the same time, as it usually happens, they might be full of stereotypes. When the talk is about the music, my stereotypical association is: dances. The female ones, when the dancers seem to swim over the stage with no visible motions of their feet, and the male ones, when the mountainers do a lot of acrobatics, and the music confirms that it is a dance of warriors. When you learn that it is all what a foreigner knows about the music of Georgia, does it make you angry?
Mirian Khukhunaishvili: It does not make me angry, because in these associations, there are some grains of truth. Georgia is a mountainous country, and mountainers usually were the best warriors, thus your associations are quite logical. Most of the Georgian dances origin from the mountain regions, the names of the dances are as follows: Svanuri, Mtiuluri, Mokheuri, Acharuli, Rachuli... The names of the dances come from the names of the regions. There is also a very specific dance, named Khanjluri – a warriors’ dance with the swords – when men imitate the war and fight with the swords while dancing. It is quite a dangerous dance, as the swords are real, made of metal...

But of course, my problem is no musical education. You do have it. The more education, the less stereotypes. If you were to deliver just one lecture to the Polish audience, a short one, and you were to tell them just something about the music of Georgia, about a fact or about a great figure of this music – something what you would like the audience to remember – what your choice would be?
I would choose the polyphonic songs and chants from the Guria region. This is one of the best examples of polyphonic music in the music of the whole world. In this region, there is a specific way of singing which is called Krimanchuli – similar to yodeling. After having heard a Gurian folk song, Igor Stravinsky wrote the following words: “Recordings of Georgian folk polyphonic songs make a great musical impression. They are recorded in the tradition of active reproduction of the Georgian folk music, the origin of which begins from ancient time. It is a wonderful finding and can give to the performance more than all the modern music can... Yodel or Krimanchuli, as it is called in Georgia, is the best song I have ever heard.“ (“America” Magazine, No 23/1967)

Being a music conductor, do you manage to promote the music composed by Georgian composers, including it into the programs of orchestras you work with?
Here in Poland, my MA thesis was about Georgian music: “The elements of folklore as the national art in the compositions of Georgian composers on the examples of selected works”. It was my first attempt to promote the Georgian music in Poland. Now, I am writing my PhD thesis about Giya Kancheli – one of the best known Georgian composers. And in the season 2017/2018, I will perform the Polish premiere of the work “Don’t Grieve”, composed by Giya Kancheli for solo baritone and a big symphonic orchestra. The premiere will take place in Rzeszow, in Podkarpacka Philharmonic.

What about Symphony by Kancheli? Just listen:

How dit it happen that you came to study conducting in Poland? Was it your choice, or just the circumstances helped?
In 2012, I got the Maria Kaczyńska Scholarship, which is awarded by the Ministry of Science and Education of Georgia. The scholarship was initiated in 2011 by Mrs Sandra Roelofs, the First Lady of Georgia in the years 2004-2013. It was she, who was choosing the students to be awarded from the Tbilisi State Conservatory.

Has Poland met your expectations?
Absolutely yes! Even more... I've got a lot of here: education, friendship, love. Poland is my second home country!

If you were to compare the musical lives of Georgia, and of Poland, what similarities, and what differences would you emphasize?
According to me, the musical life is richer in Poland than in Georgia. You have a lot of concerts and festivals, with plenty of various performers. In Georgia, there are more and more people listening to and performing the Georgian folk music, but we have still problems with the classical music listeners.

Is the phenomenon of the common family or neighborhood music playing, or singing, popular in Georgia?
Family and neighborhood singing is inherent for the Georgian musical culture. There were many family ensembles, which were very popular and important – in the meaning of creating very special versions of folk songs, even “composing” new songs. At the end of the XIX century and the beginning of the XX one, my ancestors had an ensemble, which was very important for the Georgian folklore, its name was Khukhunaishvilebis Shvidkatsa (Khukhunaishvili Septet).

Is the Polish music known and liked in your country?
Unfortunately, only a very small number of Georgian musicians knows the Polish music. It is performed very seldom. I try to promote the Polish music in Georgia, too. Two years ago, I organized and performed the Georgian premiere of “Orawa” by Wojciech Kilar. For the future, my plan is to perform one of symphonies, maybe the one of Szymanowski, or Górecki.

Thank you very much for your time and interview.